Colombia recently passed a landmark ruling decriminalising abortions for the first 24 weeks of pregnancy. This is the result of over 15 years of work by gender rights activists and civil society organisations like Profamilia Colombia – a Rutgers partner in the Center of Excellence programme and fellow IPPF Member Association. Profamilia celebrated the win with a reminder that access to free and safe abortion is a question of social justice, as Colombia has just recognised.

Rutgers spoke to a Colombian youth advocate and representative of Profamilia to get their take on the impact of the ruling and the work yet to be done.

1.What was your first reaction when you heard the news?

Profamilia: We received the news on the decision of the Constitutional Court with immense joy. It is such a historic step for Colombia and Latin America in recognising women’s rights and their full inclusion in society.

Youth advocate: I felt quite hopeful and happy to know that the efforts of civil society, organisations and even governments paid off to finally guarantee the rights of girls, women and pregnant women in Colombia.

2. What are you most proud of when you look back and see how this change came about in Colombia?

Youth advocate: I would sum it up as: security guarantee. A law such as this provides the security that rights are guaranteed. Sexual and reproductive rights finally have a place of conversation within the agendas of the territories in Colombia.

Profamilia: We have been championing the rights of women and people with childbearing capacity for more than 5 decades. We are proud as an organisation to have defended reproductive autonomy, the right to health and freedom during all these years.

We contributed to the decision by formulating a series of arguments for the lawsuit. We also made the importance of this decision visible before the United Nations Human Rights Council.

“We have dared to question, to speak out, to fight for the common good”

3. What has been the role of young people in making this a reality?

Youth advocate: Youth have really mobilised themselves for access to rights in general in Colombia. We have realised that we have a voice that we can use for these causes. Youth advocacy has been very important: we have dared to question, to speak out, to fight for the common good. In collectivity, we have found the strength to take on such a fight.

4. What does this mean for women in Colombia and the region?

Profamilia: It is a historic step in the recognition of citizenship and the guarantee of the rights of women and people with childbearing capacity! The ruling – now called Ruling C-055 of 2022 – will help to ensure that there will be no persecution or criminalisation of women to decide about their own bodies.

Colombia becomes the Latin American country with the longest time limit for free abortion, which brings great challenges for the health system in terms of information and timely care for safe abortions. We are very committed to working with other actors of the governmental General Health Security System to ensure the law is complied with.

We are confident that the decision of the Colombian Constitutional Court on the decriminalisation of abortion will serve as an inspiration to other countries in the region. But also outside the region to countries around the world that maintain legislation that limits the autonomy and capacity of women to decide about their lives and their bodies. The successive changes that have been taking place in the regulation of abortion in Latin America are not a coincidence, but rather an unavoidable transformation to which all states and nations that pride themselves on being democratic and respectful of human rights are called. Access to free and safe abortion is a question of social justice, as Colombia has just recognised.

Youth advocate: My next step is to recognise that, although the decriminalisation of abortion in Colombia is huge, we still have a long way to go. Intersectional feminism allows us to recognise that there is diversity amongst women, such as the colour of skin, socio-economic status, where she lives, sexual and gender orientation and identity. These are factors that can either hamper or help their access to the right to abortion.

Along with this recognition, we will continue to confront the barriers and fight to break them down through youth mobilisation and advocacy.

Profamilia: The ruling goes into effect immediately, decriminalising abortion up to 24 weeks and strengthening how the circumstances that allow abortion under the previous legislation are applied. Profamilia as a health service provider will comply with its obligations and abide by the decision of the Colombian Constitutional Court.

Furthermore, Profamilia reiterates its willingness to put all its technical and scientific capacity at the service of the Congress of the Republic and the Ministry of Health to formulate and implement a comprehensive public policy.

6. How can other SRHR organisations worldwide support you in countering the opposition that is emerging in Colombia against this law change?

We invite other organisations to share accurate quality information about the right to reproductive autonomy, freedom and abortion. In this way, we will be able to debunk myths through collective action and put the issue on the digital public agenda.

“We want to inspire other countries in the region that have more restrictive legislation so that they can see that the total decriminalisation of abortion is the way forward.” 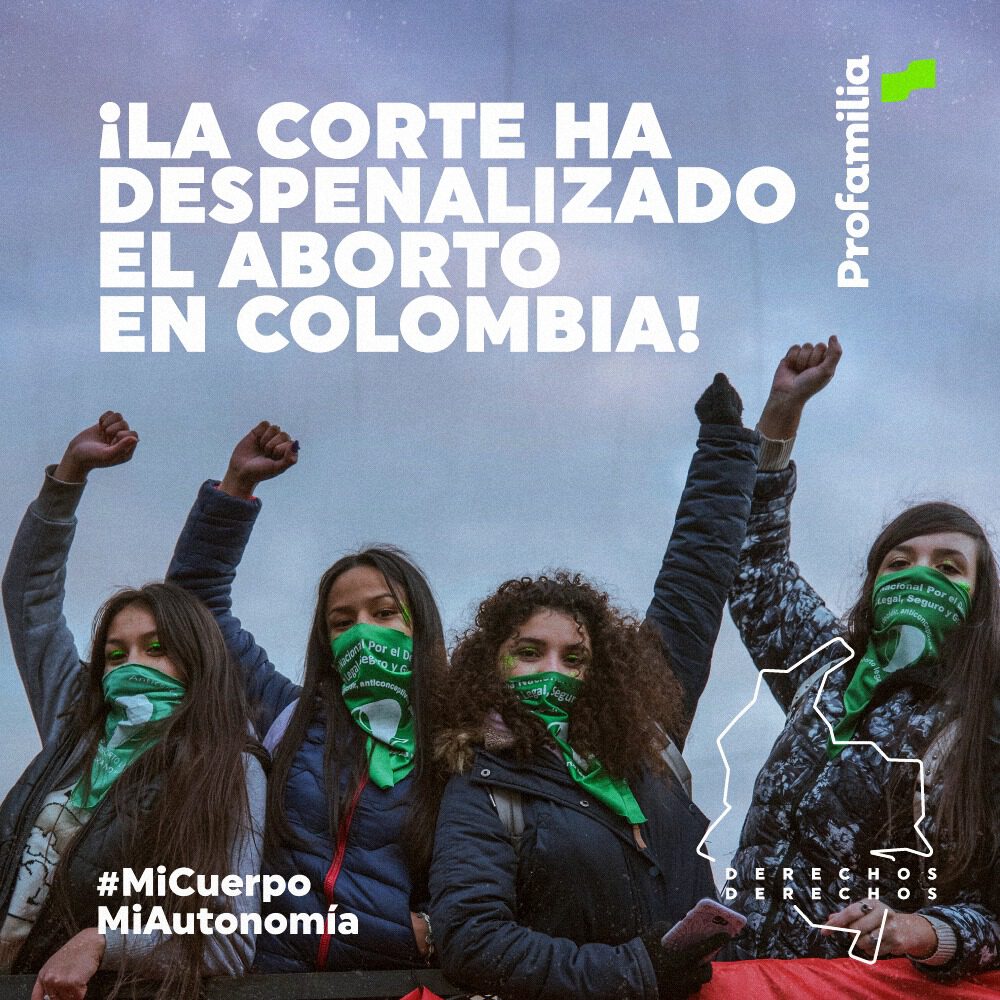 Background on the landmark change

Profamilia was part of a 27-member abortion rights group called Causa Justa – also known as the Green Wave because of their iconic use of the colour- which sued to have abortion removed from the penal code. The constitutional court ruled five against four in their favour, to pass what is now known as ruling C-055 of 2022. With this ruling, Colombia joins Argentina and Mexico as countries in Latin America which have, against the odds, significantly lowered the legal barriers to access safe abortion.

In 2006, some limitations on abortions were rolled back in Colombia but they did not go far enough. Then, abortions were allowed only when a woman’s life was in danger, a foetus had malformations, or pregnancy resulted from rape, incest or non-consensual artificial insemination. Although Ruling C-355 of 2006 was a fundamental step forward, 15 years after it was issued, criminalisation, stigma and the multiplicity of barriers to accessing safe and timely services showed that we had to move towards a model that guarantees women’s health and lives.

After 15 years of advocacy and two years of failed attempts to get the constitutional court to listen to their case, women’s rights activists finally got results.

Now, Colombian women can get abortions until the 24th week of their pregnancy without having to provide any justification. This is the longest time limit for legal abortion in the region.

But even as the success is being celebrated, there is still work to be done; in Colombia and across the region. The hope is that the decriminalisation of abortion will serve as an inspiration to other countries in Latin America and the world that maintain legislation that limits the autonomy and capacity of women to decide about their lives and their bodies.

Dutch Pride 2022: Feeling free to be who we want to be starts at school

Read more
Dutch Pride 2022: Feeling free to be who we want to be starts at school