Share this item
Back to archive
Tags: CSE, Indonesia, Sexuality education, Yes I Do

In Indonesia, almost one in four girls are married before they are 18. 17-year-old Isti was about to be one of them, as her father had planned to marry her off. But she was lucky. In the nick of time, she escaped that fate and exchanged her ring for a school uniform.

One day, Isti’s father Jusup (52) took her aside and said: “Istiqomah you’re going to be married. This means that you’ll have to quit school soon, but the school board has already been informed.” With that, he straightened his songkok (the cap widely worn by Muslim men in Indonesia), smoothened his grey-black moustache and left the room.

In rural Java, where this story played out, it’s very rare for a girl’s parents to turn down a marriage proposal. They fear that the daughter might otherwise have pre-marital sex or end up as a spinster, which would bring shame on the entire family. Other reasons for marrying daughters off at a young age include pregnancy and the risk of her ending up in poverty. So, like many others before him, Isti’s father agreed when a family from another village knocked on the door of his bamboo hut and asked for his daughter’s hand in marriage. The wedding ring had already been given to him and he was keeping it safe in his bedroom. Exactly as it all should be.

“I don’t want to get married”

Isti dared not go against her father’s will; as a daughter she had no choice but to do his bidding. But she was sad for many weeks, depressed even. She had to leave school and all but lost her appetite. Her father’s words kept ringing in her ears: “You’re a girl; what else do you expect from life?”

“Mother, I don’t want to get married,” Isti said one day. She’d chosen a quiet moment outside to confront her mother Naimonah (44), who was busy harvesting the corn. A corncob in each hand, Naimonah looked long and hard at her daughter. “Would you please talk to father,” Isti pleaded, “I don’t dare.”

The right to be educated

Since being told she had to get married, Isti had been attending discussions organised in her village by the Yes I Do Alliance. To address problems underlying child marriages, teenage pregnancies and female genital mutilation, Plan International Nederland, Rutgers, Amref Flying Doctors, Choice for Youth and Sexuality, KIT Royal Tropical Institute and the Netherlands’ Ministry of Foreign Affairs launched the five-year Yes I Do Alliance in 2016. A key part of the programme is educating young people about sexuality and their rights. The programme is being implemented in Indonesia, Mozambique, Malawi, Zambia, Kenya and Ethiopia.

During these discussions, Isti learned that girls have the right to finish their education and that child marriages are instrumental in perpetuating poverty. Furthermore, she was told, child marriages often go hand-in-hand with young pregnancies, along with risk of complications. 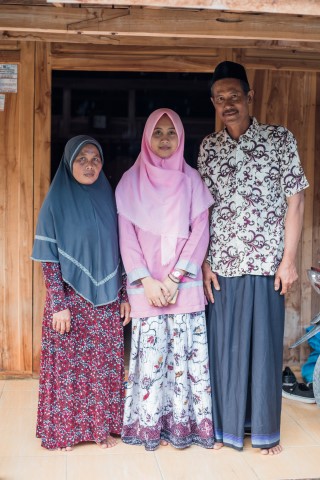 Attending these meetings gave Isti the courage to approach her mother, who then launched a counter-offensive. At every opportunity, during breakfast, after lunch, and often while they were in bed, Naimonah tried to persuade her husband to call off the wedding. “For several months, often three times a day, my wife tried to get me to reverse my decision,” Jusup shared. “Eventually, we attended a few Yes I Do discussions for parents. We were given insights into children’s rights, including those of our daughter, and how important it was that girls should finish their education. Yes, I changed my mind about marrying her off and I realised that it would be better to wait.”

Peace has finally returned to the wooden bamboo hut where Isti still lives with her parents. Outside the hut, hundreds of corncobs are waiting to be sold, the family’s two cows are stabled and a tropical downpour is helping to make the landscape an even lusher shade of green. In retrospect, Jusup concedes that he’s relieved that his daughter is now not being married off.

As for Isti, she’s overjoyed to be back in school. She wants to study religion and share what she now knows about child marriages with the villagers. “I was really lucky with my parents, but no girl in Indonesia should be married off at such a young age. Our entire society will benefit if girls like me are given more self-determination about their own lives.” Jusup and Naimonah nod proudly in agreement.

Real men don’t cry – Except (accept) when they do…

Yes I Do – Sex talk taboo

Yes I Do – Sex talk taboo