Share this item
Back to archive
Tags: CSE, Indonesia, Sexuality education, Yes I Do

When it comes to their future, girls born in Indonesia soon learn to set their sights no further than the wedding altar. But for the six girls who beat a team of boys in a start-up business competition earlier this year, the sweet taste of victory has whetted their appetite for more.

It’s siesta time in a village in north-eastern Java, where a moist blanket of tropical heat has temporarily immobilised its approximately 3,000 residents. Here and there you see the odd individual wearing a sarong and slippers shuffling down the street.

A cat stretches lazily as she basks in the shade of a jackfruit tree. Further on, an audible racket emanates from a pink-blue house in the centre of the village, accompanied by the sound of laughter. Inside the house are Siti (18), another Siti (15), Choimatul (18), Nihayatul (17), Tak (17) and Khoirudding (18), who is squatting on the floor stirring in a white, sweet-smelling mixture.

Just 12 months ago, all these girls were hoping to be married before they reached the age of 20, each reasoning that otherwise they’d end up on the shelf, as spinsters. Now, however, they are discussing the growth opportunities to be exploited by their successful tropical ice cream company. As for getting married: well, on second thought, that can wait.

Worldwide, some 12 million girls get married every year before they are 18, with one in nine of these child brides being younger than 15. But child marriage is a violation of girls’ basic rights. It reduces their independence and their chances of finishing school and, what’s more, their young bodies are not really ready for a pregnancy. Without an education or an income of their own, these girls later become completely dependent on their husbands and families. It is a vicious circle that perpetuates child marriages, poverty and gender inequality, even into the next generation. It adversely affects families, entire communities and even nations.

In rural areas of Java doing business is typically only done by men. In the past, girls, their mothers and grandmothers never had the opportunity to start their own business. Instead, girls were married off, preferably as young as possible, to spare families the shame associated with a pregnancy outside marriage. However, a few months ago the unequal gender relationships that were rife in this small village were challenged.

That’s when Susi (24), on behalf of the Yes I Do Alliance, presented a business class to the young people living in the village and four surrounding villages. Yes I Do is a programme that addresses problems underlying child marriages and teenage pregnancies by, for example, offering economic opportunities to girls and young women. In the context of the Yes I Do Alliance, Plan International Nederland collaborates with Rutgers, Amref Flying Doctors, Choice for Youth and Sexuality, KIT Royal Tropical Institute and the Netherlands’ Ministry of Foreign Affairs to tackle gender inequality, poverty and the flouting of girls’ rights. The five-year programme, which runs till the end of 2020, is being implemented in Indonesia, Mozambique, Malawi, Zambia, Kenya and Ethiopia. 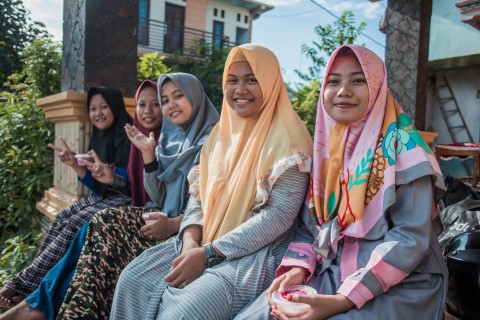 After the class, in the context of a business competition teams of six boys and six girls were given a starting capital of 120,000 rupiah (approximately €8). The boys set up a karak (prawn cracker) business. Meanwhile, the girls, after first considering banana crackers, opted to produce tropical ice creams. From the wealth of colourful and sweet tropical fruits that Java offers, they went for guava, banana and pitahaya (dragon fruit) flavours. 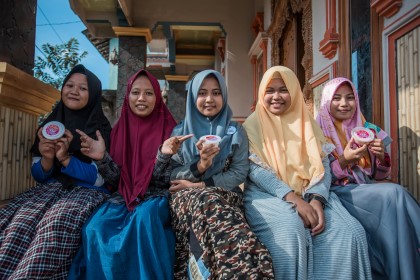 To make their ice creams, the girls add cornflower, milk, sugar and water to the fruits. The complete production process takes three days, with 50 portions made in every batch. “A whole batch is sold out in just a day!” says Tak proudly. Three flavours are available, she adds, in small, medium and large sizes, costing between 2,000 and 5,000 rupiah (€0.13 to €0.32).

With an almost 40 per cent profit margin on their ice creams, these young ladies have already earned themselves a million rupiah (about €65). “We want to invest the money in our company by buying a larger freezer and we also want to share part of the profit,” adds Tak.

The ice creams have certainly hit the spot. Villagers are completely hooked on them and they won the start-up competition for the girls. The boys, unfortunately, have proved to be rather bad losers. “They still claim that it was them that really won, but in the meantime they cannot resist our ice creams!” laughs Khoirudding.

The sweet taste of victory has given the girls a new perspective on life. In the realisation that they are on an even footing with boys, they are now proud to say that they are the first female role models in the village.

“Our neighbour claims that our ice cream business is a complete waste of time because we will all be married off soon anyway,” says Nihayatul. “But what he doesn’t seem to realise is that business is different nowadays. As for marriage, we have enough suitors knocking on our door, but they can wait. We want to continue learning; university beckons!”